So I’ve been on a roll. A self improvement roll. The goal is to keep the ball rolling uphill instead of letting the stress of gravity roll the ball down. Poor joke, I know, just let me word vomit and think as I do, ok? Cool. The other day I started using Evernote to organize a few personal projects that I have been working on. One thing led to another and I began actually organizing the application the way it was intended: by creating hierarchies of Notebooks and Stacks of Notebooks with individual notes that support them. Still not perfect yet, but seeking perfection has been an achilles heel of mine for years. Why bother starting anything if it won’t be perfect? Maybe that’s an excuse.. Maybe that’s an excuse for an excuse.. Oh well, I digress.

I eventually designated one of the notebooks as a “Self Improvement” book. It hit me that the only time I ever accomplished anything worthwhile for the day was when I actively wrote down from the day before what I wanted to accomplish. It was about time I defined the enemy within, flanked it, and finished it off. The enemy is me, but the evil part of me. It’s the evil wolf within that holds me back from reaching my potential. More on this later. I decided to flank the wolf by creating a monthly daily check list of the six things I’ve prioritized as must do’s for myself. Six is without a doubt a lot; I’d argue that any decent life-coach/psychologist would agree with me. But my reasoning is simple, these are habits that I should have already established as a standard for my daily life and I’ve attempted to make them super simple. Essentially, on even above average task saturated days, planning ahead should easily allow me to accomplish these goals. 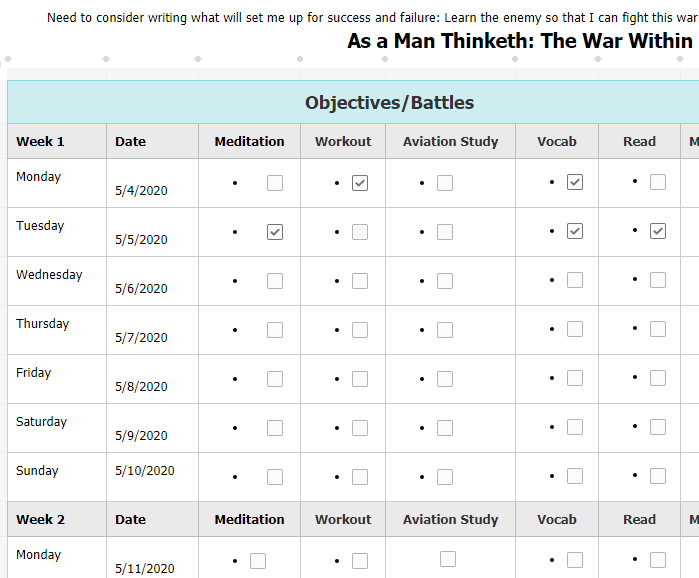 Now I’m not looking for perfection, I’m focused on improvement. The goal is not to nail every task every day without falter. Don’t get me wrong, I’m seeking the highest score possible, but what’s important is that I create consistent habits. My goal is not to become a monk and meditate 3 hours a day, just 5 min is enough to get the most out of it and have that ball rolling uphill. Looking at the image, I’m sure a few things pop out that make you question my choice in definition. Why the term “As a Man Thinketh” and the additional “War Within” and “Battles.” I derived “As a Man Thinketh” from a small book I read years back. It’s a simple read and came down to the fact that the actions and decisions you make are heavily weighed on how you think. Will I DECIDE to be optimistic or pessimistic? Will I DECIDE that my weaknesses are too heavy to bear and I must capitulate, or that it is all part of the journey and my path of becoming a better man? It reminds me of how to think. Now for all the “War” terms used (and as a matter of fact, the notebook is called “May War”), I’m drawn to the imagery of this all being an internal war. It reminds me of the importance and seriousness of the matter. Every checkmark on that list is a battle that I must fight to accomplish everyday, for internal change is the heaviest object we’ll ever move in our lives. This is no Girl Scout cookie selling competition, this is my life. This is my future self looking back and saying “I gave it my all, I led by example, and I feel comfort knowing that I will leave this ball of dirt a better place than before.”

Why not a long time ago? The truth is I started years ago, since I was a teenager. My life has been a constant cycle of push and pull to improve myself. I’ve had periods of euphoria and dark times of indifference. It can happen again, maybe it’s nature. But necessity breeds innovation. Time is ticking and if Parkinsons Law stands true, I have no choice but to start now. For “Aristotle defined tragedy as a terrible outcome arising from a person’s fatal flaw – a flaw that, had it been fixed, instead would have led to a wonderful outcome” – Ray Dalio (somewhere within that quote of a quote, I quote Aristotle). We all have flaws, but let’s all find that fatal flaw of ours, the one holding us back from truly accomplishing something beautiful out of our lives so that we don’t become some form of a tragedy. I mean, no matter how much we accomplish or succeed in life, is it not a tragedy that we could have given slightly more back to others and ourselves if we actively tried?